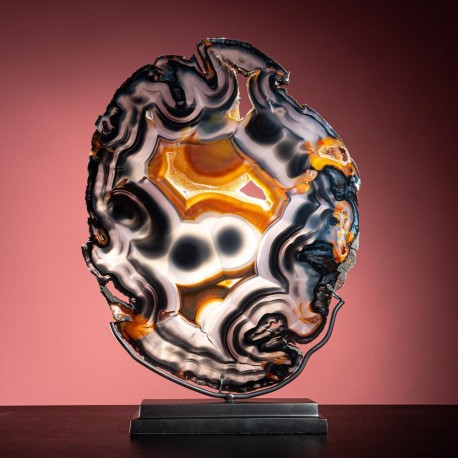 Before becoming a slice of Agate on our console, it was a round pebble from Brazil in a basalt matrix that has been sliced and polished. And before a pebble, it was a bubble of air in a cooling lava of a volcano. Lava became basalt, a porous stone and the chamber has been filled consecutively over millions of years, by water containing dissolved minerals, like Manganese oxide that gave that black color to the external layers. Each flood led to a layer of different density, color... That's how a hole becomes such a wonderfull agate. In this case the process stopped before it was completely filled. And the last layer of pure Calcite became a crystalized geode which was then covered with this beautiful orange colour. And all of this naturally.